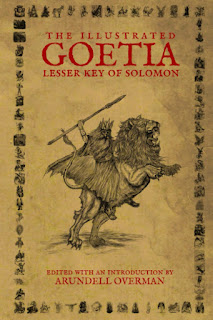 The Illustrated Goetia is the most complete edition of the book ever produced. All of the spirits are pictured, including the great kings that rule over them. Each of the tools used in the process of evocation are explained in detail.The Author met Asmoday face to face and details his work with that spirit and many others including Paimon, Valefor, Furfur, Leraje, Gaap, Ose, Gremory, Vepar, and Belial. 25 years of research and practice went into this book.Also included are notes on the 1903 edition of the Goetia by Aleister Crowley and the Preliminary Invocation, drawn from the Graeco Egyptian Magical Papyrus, along with instructions on working with the book in a traditional or non-traditional manner and the purity of the operator in preparation for the work.Comparisons are also given with the Grand Grimoire, the Grimoire of Honorius and others, along with instructions on how to incorporate spirits such as Lucifuge Rofocale into your practice of the grimoire.This is sure to be a book you will enjoy for years to come. 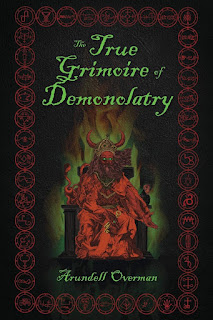 THE TRUE GRIMOIRE OF DEMONOLATRY:

The True Grimoire of Demonolatry is a new edition of the True Grimoire, or Grimorium Verum, a book of demons and spells written in 1517 in Memphis by Alibeck the Egyptian. In this edition we examine the book from the perspective of a Pagan, a Satanist, or a Demonolater, meaning, someone who approaches the demons of the book as gods, friends and allies. The original material of the True grimoire is presented, as well as supplemental material from the Lesser Key of Solomon, the Grand Grimoire, and the Grimoire of Honorius, as well as insights on how to contact the 44 demons of this legendary grimoire. 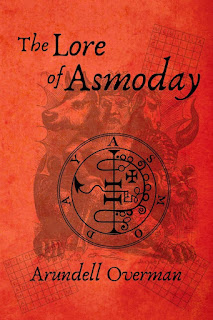 THE LORE OF ASMODAY

The Lore of Asmoday is a collection of the known legends of the demon Asmoday, or Asmodeus. Starting with his origin as Aeshma Daeva, the Persian demon of wrath, and moving through the book of Tobit, the Testament of Solomon, the Kabbalah, the grimoires such as the Sacred Magic of Abramelin, the Book of Oberon, the Goetia, and up to the modern day. Also included are notes concerning the relationship between Asmoday and his bride, the younger Lilith, as well as the authors own personal experience with this spirit. 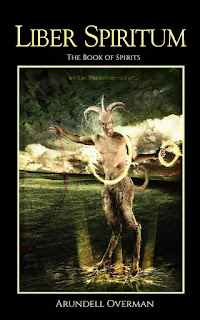 The Book of Spirits

All the spirits in this book were once gods and demons of various cultures around the world. As such, from the perspective of the Witch, or Demonolater, they are real beings, that exist within the ocean of energy that surrounds our planet earth. It is important to note that this book forms a Pantheon, a system of “many gods,” and each one of these spirits can be invoked for various reasons. What are these reasons? The same reasons that the ancient people had when they invoked their gods. For luck, for wisdom, for healing, for spell casting, for help with love, lust, illness, destruction, change in the weather, etc. Success in the work depends on your power to call them, and their power to answer. 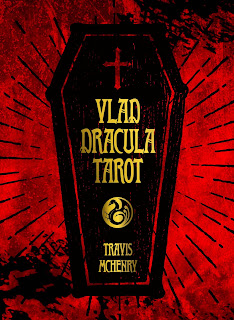 An exquisite gothic-style tarot based on the life of Dracula.

The Vlad Dracula Tarot is a 78-card tarot deck and booklet based on the life of Vlad the Impaler, the infamous mediaeval ruler of Romania who inspired Bram Stoker's legendary vampire. 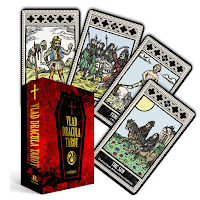 The 78 original woodcuts of the deck depict scenes of cruelty and cunning masterfully drawn by Russian artist Nikita Vuimin from instructions provided by Travis McHenry, author of the Occult Tarot and Angel Tarot.

Each image portrays an episode in Dracula's life and is perfectly paired with a tarot card that reveals its astrological and occult meaning. This combination of design and esoteric knowledge results in a historically accurate deck that can be used as a divination tool or simply cherished as a macabre work of art. 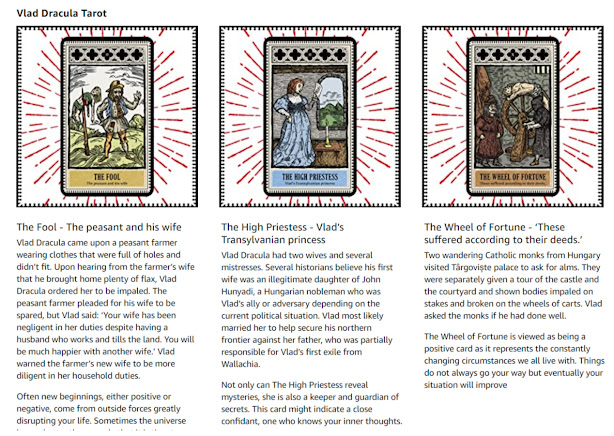 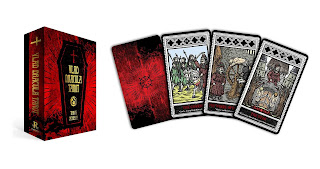 A renowned modern occultist, Travis McHenry is a native of rural Pennsylvania and grew up surrounded by the folklore of the Appalachian Mountains. He began studying the dark arts in the late 1990s when he stumbled upon a secretive coven of witches who subsequently befriended him and allowed him to publish the first written history of their magical tradition. Travis has been a student of many religions, including Buddhism, Jainism, Hinduism, and the Greek Pantheon, and was an ordained deacon in the Baptist Church. In addition, from 2001 to 2008 Travis served as an intelligence specialist in the United States Navy. He is also the creator of Occult Tarot and Angel Tarot. 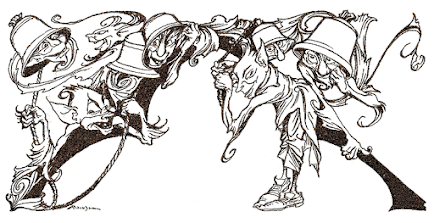 Posted by Edge of the Circle Books Newsletter at 8:44 PM