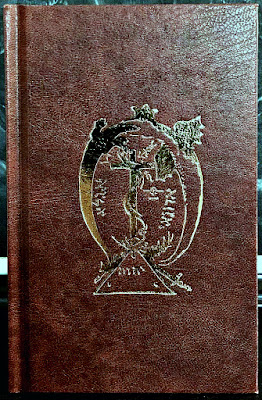 FROM THE PUBLISHER:
The contents of this book:
- An Introduction written by A.D. Mercer covering the historic aspects of the works within this book.

- An essay written by JCB on Archangel Metatron and his divine and infernal aspects amd darker Qliphotic counterpart spirits.

- A short text by A.D. Mercer on the Four Demon Kings.

- Then what follows is the actual facsimile edition of the Clavis Inferni.

- An English translation of the original Latin language Conjurations by A.D. Mercer.

- And placed at the end of the book is the Credits & Copyrights page.
The internal lay-out design is printed in full color entirely and also has the defoliated page just like the original book.
The Cyprianus: Clavis Inferni (translated Key of Hell) is a late 18th-century book for the purpose of the practice of black magic. The aim for the publication of this book is to make it available to students and practitioners who are interested in researching the grimoires of the Solomonic & Goetic Tradition. The text in the original version of the Clavis Inferni was written in a mixture of Latin, Hebrew and a cypher alphabet called 'Transitus Fluvii' or "Passing through the River" by C. Agrippa. 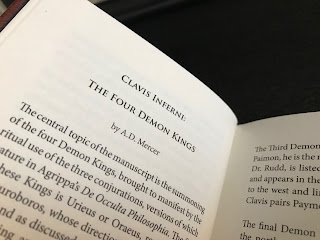 Excerpt of the Introduction text by A.D. Mercer.

Despite the title of the manuscript, it is important to establish that there is no possibility that the present text is by the (in)famous St. Cyprian. Due to his supposed magical dealings, prior to his conversion to Christianity, St. Cyprians name has become attached to a wide range of magical tracts and works. Note that this is not the classic St. Cyprian, the Bishop of Carthage from the 3rd century, but the supposed Bishop of Antioch, however there is no recorded Bishop of Antioch by that name. Nevertheless the name has been linked to magical practises around the world, most notably magic from Spain and Portugal and, in particular, their respective former colonies in South America. Cyprian also features in some magical traditions in Scandinavia where he plays a central role similar to that of Faust in Germany and Central Europe, with tales of pacts with the devil etc. as well as being the supposed author of other magical tracts...... 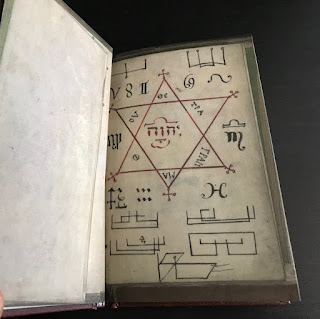 .....The manuscript itself may well fit into the Solomonic cycle of magical Grimoires as it is chiefly influenced by Agrippas Three Books of Occult Philosophy (where the author has used the Passing the River script found in Agrippas book) and by the Heptameron, which contains conjuration spells that are similar to the ones found in the present manuscript. There are also signs of influence, or at least evidence that the author had access to,other texts including The Grimoire of Pope Honorius and The Sixth and Seventh Book of Moses, both of which appear to be the source for the particular spellings of the names of Demon Kings used in the Clavis, indeed the use the word Clavis itself points the Solomonic cycle. Thus confirming that this is a classic grimoire for that tradition.

Excerpt of the essey On Metatron by JCB.

This book is intriguing not only because of the mystical feeling one gets when looking upon the illustrations, symbols, text and glyphs so richly inscribed upon its pages, but also because of its captivating title: Clavis Inferni sive magia alba et nigra approbata Metratona, which translates to Key of Hell with White and Black Magic approved by Metatron. By this title, the author clearly states that the workings of magical practice herein, with their formulas and words of magical significance, have had their effectiveness tested and proven under the supervision and with the blessings of none other than the archangel Metatron himself.

According to the Babylonian Talmud, Metatron is the highest-ranking angel and the supreme ruler over all who reside upon our Earthly material plane as well as over those in the Heavenly realm. As such, he is the angel closest to God and is closely associated with God as the Lesser YHVH. In the Kabbalah, Metatron is named the ruler of Kether (the Crown), the first and highest Sephirah of the Tree of Life, representing Heaven or Paradise, with its associated planetary body being Pluto. The lowest Sephirah, Malkuth, representing the material, Earthly realm the furthest from Heaven and positioned at the bottom of the Tree of Life, is represented by planet Earth and is ruled by Metatrons twin brother, Sandalphon........ 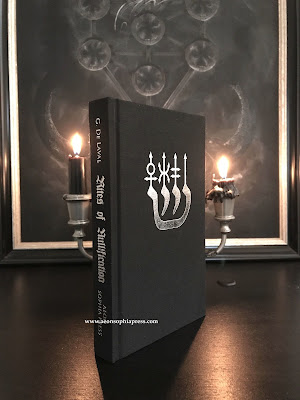 SYNOPSIS:
Rites of Nullification comprise a detailed exegesis and expansion of a passage, in the book Black Magic Evocation of the Shem ha Mephorash, under notes for the demon Lekabel, which enumerate the four Qliphothic worlds of negation set in antagonism against the four Kabbalistic worlds of creation.

Originally written and released in truncated form as the thematic and lyrical underpinning of, and accompaniment to, the four-song album,1557: Rites of Nullification, by Swedish black metal ensemble Mephorash, it quickly became clear that the material therein cried out to grow into a more complete initiation, which is exactly what Aeon Sophia Press will be releasing: a full-praxis version of these ceremonies. 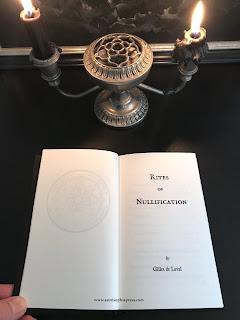 The grimoire enumerates and constructs a carefully and mathematically rigorous gnostic ceremony of the wedding of the Bride of Chaos using as its base structure a four-dimensional contemplative manifold formulated from permutations of the sacred binary, over which are overlaid a set of commonly used occult symbols to create a ritual space for the transformation of consciousness. These tools allow for that primordial differentiation, which gives rise to the possibility of experience itself, to be methodically disassembled. Using the book, the witch is given the opportunity to use demonic energies arranged carefully to deconstruct her own personality as if it were a scripture, giving rise to the possibility of new consciousness beyond the horizon of her reality tunnel, as she perforates it by marrying it to chaos.

In short, Rites of Nullification is an extremely detailed and exhaustive self-initiation that takes the practitioner on a deep dive into ritual and mystical Satanism, beginning with a betrothal to the Devil and commencing in the ur-gnostic bridal chamber itself. 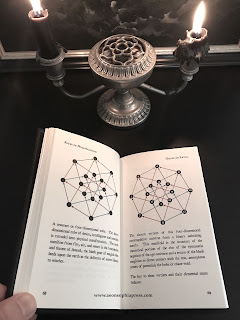 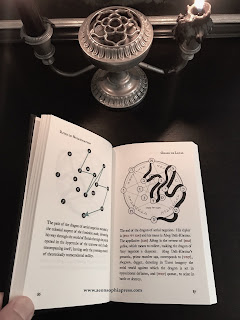 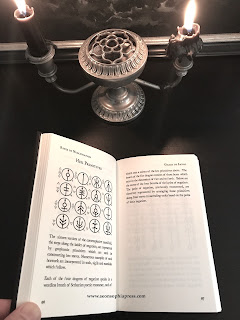 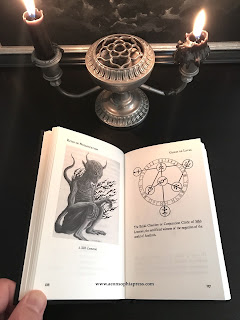 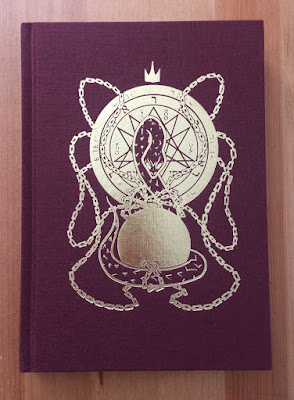 FROM THE PUBLISHER:
A colorful study of a passage from the Masoretic text wherein are enumerated eleven tribes of Canaan, a land and people targeted by the God of the ancient Israelites for invasion and systematic extermination. As a result they symbolize in the context of these folk stories a sort of "Anti-Israel" in the sense that they are an "Un-Chosen" people, providing an adverse literary complement to the idea of ancient Israel as the "Chosen" people. In Sacerdotium Umbrae Mortis I search out and study various 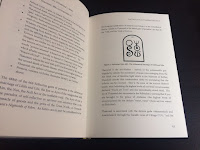 poetic and esoteric resonances from the original text and use this basic toolkit of synthetic mythemes to construct a fully coherent esoteric system, including rituals and ceremonial implements, and its own catalog of classes of spirits, with their rulers, who can be employed using classical techniques of Western mysticism, including those outlined in Black Magic Evocation of the Shem ha Mephorash. 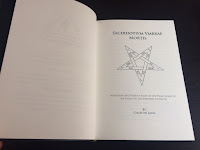 "The book is a complete system of initiation and ascension in the grades of The Priesthood of the Shadows of Death, an order of predatory sorcerers who specialize in the practice of energy vampirism and in the necromantic conjuration of revenant phantom shades from the eleven hells of the Qliphoth.

The system is based on meticulous research into the eleven tribes of Canaan, enemies of the Right-Hand Path who esoterically represent eleven classes of hostile, predatory vampiric shadowforms who emanate from hells of black magick and the anti-world of death. Multiple levels of correspondences and esoteric enumerations are given as well as conjuration sigils and numerous seals and illustrations so that the initiate can ritually evoke not only these necromantic shades, but their ruling princes. 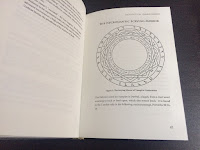 The grimoire, when studied and used properly, allows brave magicians to ascend in exotic spheres of consciousness and power by communion with and transmogrification by these venomous Lords of the Abyss. Included are various lists of attributes of vampirism, the four stages of initiation, four grades of mastery, tables of days, hours, and elemental and planetary correspondences suitable for infernal conjuration, and complete descriptions of the panoply, implements and rites of vampiric necromancy that comprise the order of Sacerdotium Umbrae Mortis." 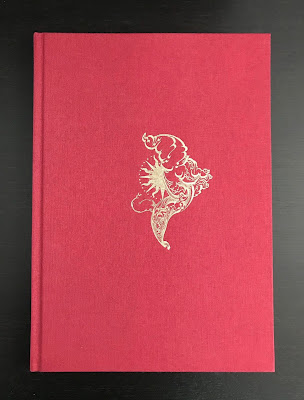 SYNOPSIS
A Second Nature is a book that compiles three years of artistic production. An introduction and reflections upon the subjects are included in order to let the reader recognize the different motifs and symbolic elements as they combine through the works. However, the focus is evidently letting the works speak by themselves and among themselves as they create a book of images. 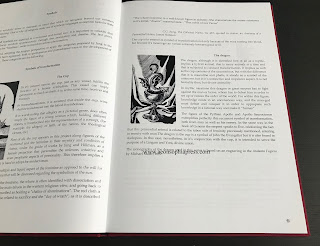 The chapter entitled “Bone Works” reproduces illuminated human skulls. The works in the image sequence composed of drawings and paintings are compiled in three groups: The first one is composed of works about angelic figures, the role of the metamorphosis in ancient magic and the Divine feminine. The second one is devoted to the study of an acephalous figure, and the third one to visualizations derived from human remains.


The first nature implies the sensible world and the second nature, the invisible or the world of ideas. Art can somehow become a bridge between the two. It is also said that habit is a second nature. In the present work that second nature is the habit of drawing. Drawing is here approached as a way of insight. Any form of praxis can serve such a purpose, and that is an aspect that theory often seems to forget. 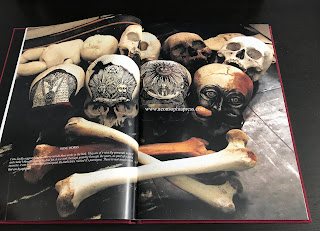 
Excerpt of Introduction: the two natures.


The title is inspired in an early theological debate upon the nature or of the Christ, the Nestorian controversy. If Christ was both divine and human in one body, as wine and water, or if these natures were divided, as oil and water in one cup.

The “first” nature is the sensible world, so long perceived in the west as inferior. The second nature is divine nature or the world of ideas. Is there a unity beneath this great polarity? That is not to be answered in theory.

It is also said that habit is a second nature. Something that has been so thoroughly rehearsed that feels almost like a new instinct. In the present work that second nature is the habit of drawing. Drawing is here approached as a way of insight. Any form of practice can serve such a purpose, and it is the aspect that theory often seems to forget.

This work is composed by two kinds of drawings. Some serve as ways to register visualizations, that are otherwise impossible to be expressed in verbal form. Others serve as ways for the learning and appropiation a concept, it is therefore here believed that drawing as an action brings a practical understanding of the depicted form. 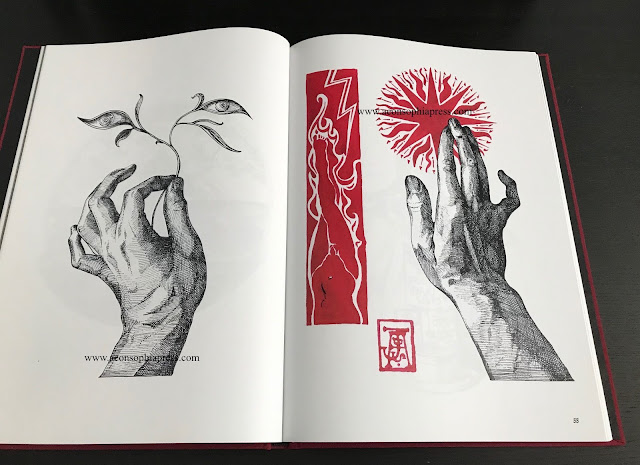 This work compiles two years of drawings, selected and arranged into a narrative progression.

The book is divided into three sections, signalized by three obeliscs, an emblem taken from the Hypnerotomachia Poliphili. If put together, their letters form three names of god. These, at the same time, are three letter names. But, as stated by the maiden Logistica, “no mortal could perfectly discern or see simultaneously two sides of this figure, but one at a time, and that is the present.”


About the author
José Gabriel Alegría Sabogal. Born in Berlin, lives and works in Lima, Perú. Studied painting at PUCP (Pontifical Catholic University of Perú) and a while in the Universitat de Barcelona (UB). Currently studying a Master in the History of Art at PUCP.

His visual work makes use of the line-technique of renaissance copper plate engraving but applied to direct drawing. Both the themes and their treatment are essentially anachronistic and follow the initiative of developing a symbolic language that aspires to a timeless nature.

He has also developed the visual concept for several musical albums by bands from America and Europe, amongst them Whoredom Rife (Norway) and Inferno (Czech Republic). 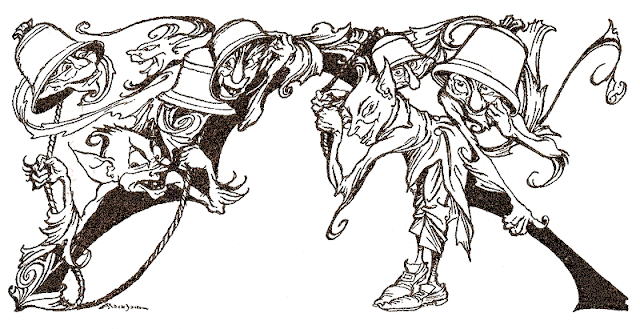 Posted by Edge of the Circle Books Newsletter at 6:30 PM